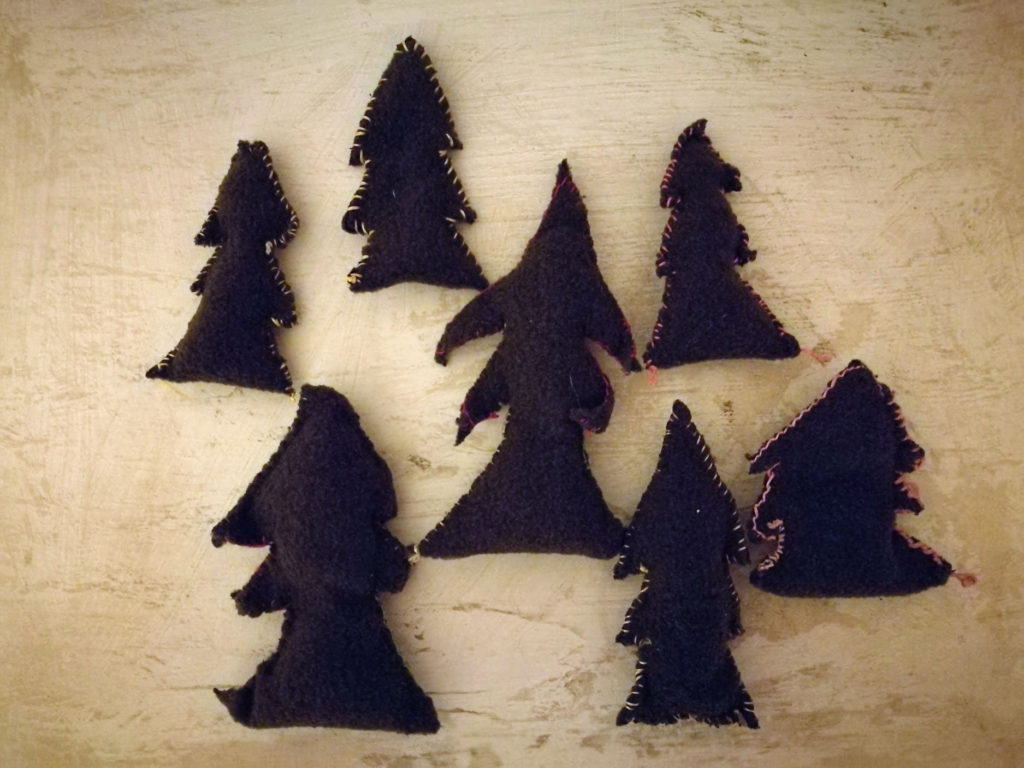 Title: Oyasumi Tree
Year: 2009, 2011, 2013, 2017
Size: variable
Material/medium: mixt media, installation
Place: Yokohama, Fukushima, Tokyo, London
Brief outline: Oyasumi Tree is an art project for “forestation”. I tried to nurture hope in someone’s dream, while people couldn’t make anything in the real world. I planted a tree-shaped scented bag with lavender that has a good sleep effect at the bedside. In 2009, I planted Oyasumi trees at the bedside of homeless people in Yokohama Kotobukicho. Afforestation was conducted during the Great East Japan Earthquake in 2011 and the 2013 hate speech demonstration for Koreans. In 2017, I held an installation exhibition with text as the main feature at Deptford X in London, England.

“Oyasumi-trees” is my art project, with a lavender stuffed tree shaped soft object. I was thinking about growing these trees next people’s bedside.

After the big earthquake in Japan, happened on 11th March 2011, I was anxious. It was not just me who was feeling anxious, but all of us in Japan were feeling similar anxiety. I will talk about what exactly this feeling of anxiety was about later. But every night when I went to bed, I had to place my shoes beside my pillow just in case if I had to escape.

After that, I heard the news that the roof of nuclear power plant in Fukushima exploded. “There is no problem as it is a hydrogen explosion.”, “Run away as it’s bombed.”, “Do not run away as there is no health hazard.”… Many words are flying around here and there.

After the Chernobyl Disaster in 1986, all the jams from Russia disappeared from shops.
I remember this, as a child I much preferred the taste of Russian Jam which was not too sweet compared to the American brand. I loved black currant Jam tasting the raw material made in the communist country. Remembering the disappearance of Russian Jam, but in reality could not do anything.

My family has left Japan. They bought me an airline ticket and told me to escape from Japan many times, but I did not move. I do not know why I did not escape then. I travel well alone, so reverse situation felt strange. My affection for my family has not changed but the fact I no longer have home to go back to, felt like a gaping hole punched in my heart. Things are unsettling and nauseous seasickness is with me everyday.

After the earthquake struck, I decided one thing. Not to see any images of disaster. I watched textual information on TV and the Internet, but did not see any photos and movies. Because I was very afraid. I did not have confidence in myself to over come the fear. So I decided to eliminate the visual information as much as possible and tired to trust in my own actions

I was sad when I saw so many online post such as SNS stating “ I am afraid” “I can’t sleep” many people were expressing the anxiety. Although I can not make these people feel at ease by these objects, I thought it might help a little. At the corner of my mind there was a voice telling me that it is hypocritical to use art work in such a disaster, and I felt ashamed to continue.

Every night when the thoughts were going around as if I was counting sheep to let myself go to sleep, “ I want to make an art work of Oyasumi-tree “, “ But I am a hypocrite to exploit situation to make art works”, “ But may be some people can be helped by the smell of lavender in my stuffed toy”.
The aftershocks were still continuing, and sometimes I felt tears welling up. It was not just me who was feeling like that, but everyone was tearing up from time to time without reason.

At the edge of my dream some one told me that “You are over-conscious. It is not a question whether you are a hypocrite, no one cares about you.” I understood.That’s true. My work ”Oyasumi-tree” is like a toy stuffed with scented lavender, and if there is no point for doing this art work there is also no ill effect for doing it either. So I decided to carry it out anyway.

At that time, Mr. Hienori Kondo launched ACT FOR JAPAN. I told him that I wanted to give out a Oyasumi-tree. And two days from April 16th to 17th, I did a workshop to create a Oyasumi-tree at Tokyo Wonder Site in Shibuya

“Oyasumi-tree” made by men who never had any experience of sawing since their home economic class at school are particularly sophisticated. but the clumsiness and irregular forms are actually cute. The bak of these men bending forward to do stitching appeared lovable.

I did not have any idea what I was going to do with the result of these workshops. As the stuffed toys are not essential humanitarian items needing to be distributed to the victims in the area. The art work itself had no value except off chance someone might want it.

I do not even know how to get to the affected area. I have consulted Google, but could not figure out. It said “Go to the volunteer centre and you need to secure your own accommodation and food “ I did not have tent, nor car, but I had sleeping bag and physical fitness.

I found a night bus to Sendai from Shinjuku. I also found a special express bus going to from Sendai to Ishinomaki. Actually I wanted to go to Kirikiri in Iwate where my friend lives, but the road is broken and there is no traffic. So I have decided to go to Ishinomaki this time. Ishinomaki. This is my first time to visit.

I packed “Oyasumi-tree”, 10 boxes of calorie mate, 2 liters of water and a sleeping bag in a backpack and put on the Climbing boots so as not to become tetanus by stepping on debris. I wrap a towel on my head, no makeup, working clothes, dust mask. In Tokyo train, everyone was glancing at me. I pretended not to notice, I took the Yamanote line and went to the departure place of the night bus.

ere was absolutely nothing. Vast land stripped off. There were many military vehicles. I was thinking that a battleground might look like this.

Air was full of rotten and burning smell. Everything is grey or rusty colour. But cherry blossoms were in full bloom, and clouds are flowing in the sky. What a sight. Nature is totally too beautiful. I really did not know what to do. No matter where I have gone, the cherry blossoms were blooming beautifully, and garbage and tone up clothing are clinging to the branch.

I registered as a volunteer for mud and debris removal. Five men and I removed the mud of the soy sauce factory. The soy sauce factory was operated by an old couple. Mud is very heavy. Muddy clothes and photo album, that was what they used for a while ago. It is painful both physically and mentally to throw it away in front of their eyes.

It rained so hard so I had to give up and come home. The old couple gave me a bottle of soy sauce which was buried under the mud. So when I got back to Tokyo I had a dinner party. I went back to the old couple later with the money for soy sauce.

We went to a primary school which was used as a shelter. I gave my “Oyasumi-tree” to a kid who told me it is smelly! and told her to give it to her mum.

When we arrived at Onagawa, hospital, I took out my courage to say to the nurse who was on duty, that I had these “Oyasumi-trees’ which gives out nice smell next the patient pillow. To my surprise, the Nurse was over joyed and said “ Oh! It is cute and smells lovely! We have many patients who could do with these as there are nervous person in the ward where care of the mind needs, so it will be good to take this.” She contacted the ward

As soon as she contacted ward, I passed through a long hallway, opened a number of locked doors and brought me to a ward provided the mental care.

So I told chief nurse, I made a Oyasumi-tree and came from Tokyo. Chief nurse said pleasure, let’s distribute it to the patient. She was kind enough to accept my explanation that we are not distributing them but planting them. she easily understood. Because there are various patients, I could not plant all the trees as I met everyone. They said that they wanted a gentle smell on the land full of horrible odour.

After that, we returned to the old couple of soy sauce factory. We try give relief supplies, the old woman said, “We do not need anything, We are sorry for other people.” And she gave us bread and water. However, she looked at the sewing kit and tweeted with a small voice saying “ Can I have your sawing kit.. as mine were washed away” What she wanted was not the material things, but the tool which might give her the way can re-connect to the way she used to live her life.

I went to various places with Urushi ‘s car in the rain. I looked at it like a tourist. Life is shattered and falling. The fish has smelled rotten smell. Something smells burning. Everything has changed in this landscape. Pfcourse, I have never been here, so I did not know the landscape before, but it is not that I do not recognise it compared to what existed before, but I rather, I think I found out that unknown world has begun.

My art work,” Oyasumi-tree” has very little point in this situation. The smell it give out can not mask horrendous odour out there. There is a voice in me saying art work is laughable in this situation, but I felt it was worthwhile bringing these tiny trees with me.

This is the story of the How I acted as an artist and worked on March 11th.

← The Box
The Worldly Philosopher’s Room →