When The Wind Blows 風が吹くとき 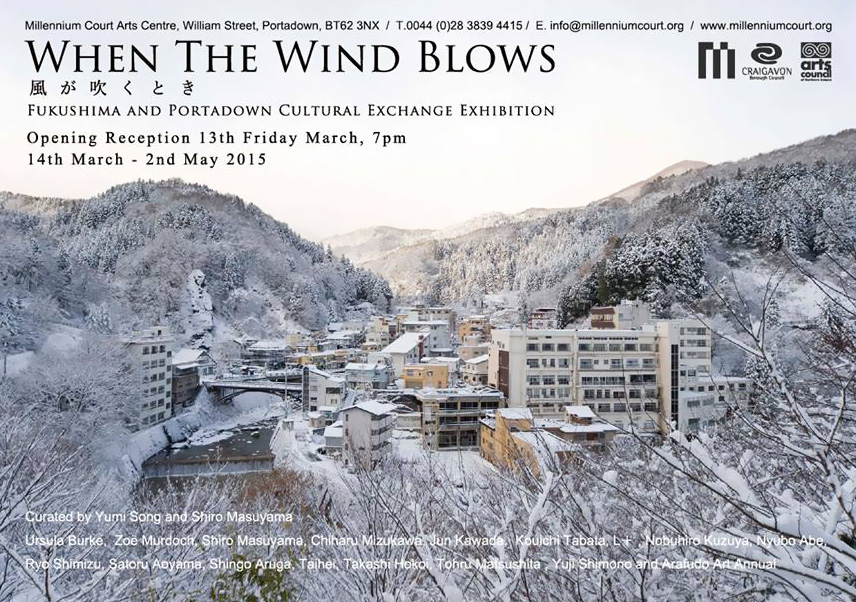 Gallery 1
Curated by Song features work from the Arafudo* Art Annual 2013/2014. This festival of contemporary art, directed by Song is based in the hot-spring resort of Tsuchiyu Onsen, Fukushima and was initiated in the aftermath of the Fukushima Daiichi nuclear disaster 2011. Selected work ranges from sculpture, painting and textile to installation, animation and video including documentation of site-specific relational projects and performance. Some of the works employ traditional Japanese techniques (Aburidashi) and forms to contemporary effect, make use of natural resources like seaweed and hot spring water or refer to place, the region, its history and the invisible threat of radiation. This is not a exhibition on the theme of radioactivity. The festival’s aim is to challenge received perceptions, encourage dialogue about the disaster and the ramifications of stigma and fear in the weakening of the local economy, place and wellbeing.
Song says “The purpose of the festival is to understand that in contemporary society rumours can have a profound effect on the imagination.”

Gallery 2
guest co-curator of Arafudo 2014 and artist Shiro Masuyama, has invited the Northern Ireland based artists, to make new work in response to a recently renovated cold war bunker, located in Portadown, Northern Ireland. For him the discovery of the bunker creates an opportunity to connect with the Fukushima work, particularly poignant because of Japan’s historical experience of nuclear warfare in Hiroshima and Nagasaki. As a curator he draws parallels between the military imagination involved in making preparations to survive this unpredictable scenario, with the creative leap required from the artists in making their response. The works are ceramic sculpture, a series of collage and a video installation; a video experiment by Masuyama simulating 6 days in bunker conditions. The exhibition’s title refers to Raymond Brigg’s 1982 graphic novel showing the imagined effects of a nuclear attack on Britain. It connects to Tsuchiyu Onsen which has been protected from the full extent of airborne radiation by the shelter of the surrounding mountains. Contrary to its recent economic decimation as a tourist resort the town registers the lowest radiation in Fukushima. The exhibition extends the ideas of Arafudo; it aims to highlight the ruptures between what is imagined and the lived reality, foreground art’s role in this process and to connect different local and global perspectives.

*The word “Arafudo” means “taking the first steps on the first snow of the season”, in the Fukushima dialect. EDUCATION: Masterclass in Porcelain with exhibiting artist Ursul